How did it all begin?

by Michael Thiele – the first president of the Caravan 2000

Perhaps you still remember the summer of 1996. The argument about the criteria for entry to the European Monetary Union was taking the strangest turns. What had begun as the vision of a historically unique Community of Europeans degenerated in to a welter of public discussions on banal monetary issues.

The three of us (Udo Keidel, Hanjo Diekmann and I) were sitting together on a fine afternoon during a visit to Assisi and talking off our feelings of frustration. Was that really all there was to it? Were the efforts at forging a European union to have no social component at all? And certainly no thought had been spared for those who are sidelined by society - the disabled, the foreign, the homeless.
It was then that it came to us - the idea for CARAVAN 2000 - the idea of a pilgrimage through Europe for variety and understanding. Not quite in the form it is in now, but still fairly specific: it would be a caravan pilgrimage from Hadamar to Assisi, which would be a mouthpiece for all those who had nobody to lobby loudly for them. A mobile meeting and integration place which make people sit up, look and listen. Which would give an insight into the lives of disabled and disadvantaged people in Europe, those caught between exclusion and integration. Which would offer the opportunity to come together across all national and cultural barriers in mutual respect and autonomy And which would help to promote respect for differences in our daily dealings with one another.

Since then our pilgrimage has already passed some important stages in its planning. We are in the fairest way to establishing a stable network of cooperation and solidarity in Europe. To developing a process by which by actually living together we learn to see Europe and our world as a place to live together in.

This is a historic opportunity which we should grasp – and grasp with all the power, we can together muster. And whatever our feelings about the Euro were- well, we have the Euro to thank for it. 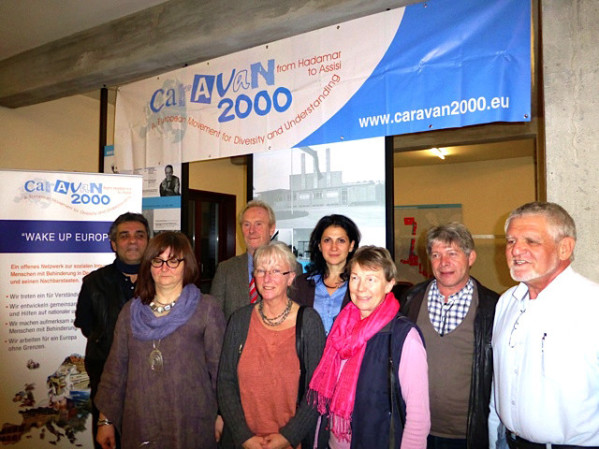