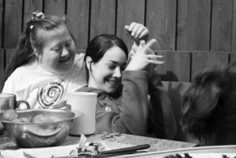 The members of the Caravan 2000 movement work to allow every human being in each member country to exercise the same basic rights as other citizens of the same country. We will help individuals with social, educational, mental, or physical disadvantages to live a life characterised by the same quality as that of other citizens in the same country.

These goals will be realised through:

The concrete actions that we engage in include: International professional exchanges, joint conferences, seminars, workshops, tours, and vacations.

The “Caravan 2000 International” federation aspires to give everyone a chance!