Welcome to the Caravan Federation’s most south-eastern member!

AKIM-Jerusalem, a voluntary, a-political, non-profit association provides services to persons with mental disabilities of all ages and levels of functioning, residents of Jerusalem and the surrounding area. We serve members of all population groups in Jerusalem independent of their religious, ethnic, gender or other affiliations.

Established in 1951, by Drs. Avraham and Mally Spieghel, Jewish immigrants to Israel from Germany, AKIM-Jerusalem is one of the most experienced non-profit associations in the area of social service development and administration in Israel.

At this point in time, our services focus on two areas: (a) Administering a variety of community living arrangements (3 hostels and 16 apartments) for 157 people with mental disabilities, and (b) Providing a range of supports to over 300 families whose member with disabilities still lives at home.

On the following pages you will find information on current and future programs and events to which international friends and partners are welcome to participate: 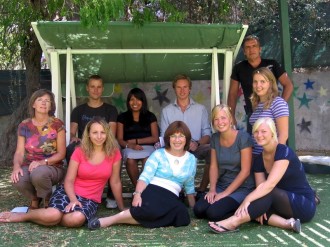 Throughout the year volunteers from around the world give of their time and heart to AKIM-Jerusalem’s clients. In 2008 and 2009, volunteers came from the Czech Republic, Germany, USA, Finland, Switzerland, Canada, Holland, Belgium, Peru, Korea and Denmark staying for a minimum of 3 months, although many stayed for far longer. All the volunteers work 40 hours a week and receive from us board and lodging, pocket money and a monthly bus card.

Several of the volunteers come to AKIM-Jerusalem as part of their degree courses to become Social Workers and are helped by our professional staff to complete their practicum. Each year AKIM-Jerusalem also accepts volunteers from Germany as part of the National Service option available there (for those young men who do not want to do Army Service). The remaining volunteers come through one of two ways: “Friends of Israel” societies in a number of countries, or through “word of mouth” from friends and family who have themselves volunteered at AKIM-Jerusalem. 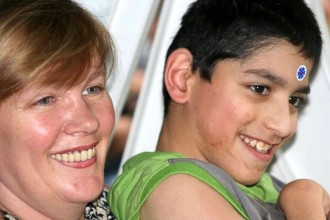 "Nofshon" Respite Care Center
AKIM-Jerusalem’s Family Support Center includes a Respite Care program to which children come for anything from a few hours to several days at a time, thus giving their families a chance to “re-charge their batteries”.

The association also runs an extended school day program at the Ben Yehuda School of Special Education. The 26 children enrolled in this program are aged 10-14 and they have medium to severe mental disabilities. Several of the children in the group also have autism and all have severe behavioral problems. For the parents of these children private care is usually too expensive and the children’s participation in this program makes it possible for the parents to work a full-day and maintain their economic independence.

The aim of this project is to give these children a rich and diversified leisure curriculum, which encourages mental, emotional and physical development. The program is open five days a week from 2-6 p.m. and includes different workshops on such topics as: arts and crafts, caring for pets, games, singing and movement, all of which are designed as enrichment experiences for the children.

The PSOUU association in Gdansk invited a group of artists from AKIM-Jerusalem to visit Poland in 2005. During October 2008 a group of four artists and their accompanying counselors from Poland visited the programs of AKIM-Jerusalem inspired by the “Caravan 2000 Federation’s aspiration to promote a world of Diversity and Understanding. The visitors and AKIM-Jerusalem’s artists conducted a joint art and music workshop over seven days. In their free time, our guests visited important tourist sites in and around Jerusalem.

Seven representatives from AKIM-Jerusalem visited Frankfurt, Germany from October 30-November 6 2008, as guests of the IB association (Internationaler Bund). Staff members of IB, Mr. Ule Holzapfel and Mr. Ilja Dabosh met the group and accompanied them throughout the trip.

Visits were made to IB’s programs for persons with special needs who live in the community and for youth at risk. Tours of the area were also arranged for the group and a meeting was held with a representative of the Mayor of Frankfurt as well as with Caravan 2000 Federation vice president and director of IB, Mr. Michael Thiele.

In October of 2009 a group of six representatives from IB arrived in Israel as part of this bi-lateral, professional exchange program. Together with Mr. Victor Lipak, Director of Residential Services and Ms. Efrat Cahane, Social worker at the Magen hostel, they visited a number of AKIM-Jerusalem services. The group also toured Jerusalem, Tel Aviv and the Dead Sea.

Future projects for 2010 – options for international participation At the end of April 2010, Polish photographer Oiko Peterson, will conduct a one-week photo workshop in Jerusalem together with a number of persons with special needs. Local students of photography will also take part in the project and provide support in the form of costumes, choreography, and light. The project is conducted jointly by the Polish Institute in Israel and AKIM-Jerusalem.

The exact dates for the workshop and its theme will be determined in the coming weeks.

Caravan members and other international partners who are interested in participating in this project, please contact: Dalia Poran at dalia@akim-jerusalem.org.il.

The 2009 sponsored trek "Miles for Smiles" was held over 3 days in June and over 50 men, women and children from Israel and abroad walked the over 80 kilometers along the Israel Trail from Tel Aviv's Old Port to Yad Kennedy in Jerusalem.

Each trekker commits to bringing a minimum of $1,800 of donations within one year to support the work of AKIM-Jerusalem. The last 7 years have seen a large increase in the number of people trekking for AKIM-Jerusalem and thus contribute to improving the quality of life of people with mental disabilities in Jerusalem.

We would be pleased to have new trekkers from all over the world join us on our 9th trek which will be held between 9-11 March, 2010. The upcoming trek will be held in the South of Israel traversing the desert by starting near the home of first Prime Minister, David Ben Gurion in Sde Boker and ending inside the Ramon Crater.