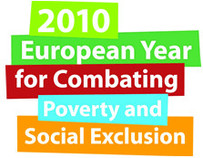 In the year 2010, which is the European Year for Combating Poverty and Social Exclusion the Caravan members plan to conduct a series of high-publicity actions and projects including among the others debates on the United Nations Convention on the Rights of Persons with Disabilities and discussion on the law and benefits regarding the living conditions of people with disabilities and other people in the risk of being marginalized.

“What place do people with disabilities and disadvantages have today in the house of Europe?” Conference

17-21 March 2010, a conference “What place do people with disabilities and disadvantages have today in the house of Europe?” took place in Hadamar, Germany.

The impulse for the conference was the fact that it had been 10 years since a movement for diversity and understanding had made its way through Europe. For the 10th anniversary, an impressive series of activities are planed, whereof the first took place in Hadamar – in remembrance of the opening week in the year 2000.

During the conference the delegates, who were people with disability spoke up and spoke for themselves. The whole conference was run in the accessible language.

Main focus of the conference was laid on the situation of people with disabilities and disadvantage in each partner country 10 years ago, changes and development up to now in regard to their legal status, social acceptance and empowerment. Reports in simple language on the articles of UN-human rights conventions, historical references, values of Caravan 2000 and ethics were presented. “Open Space” and “World Café” as working methods guaranteed a great success in inclusion of all participants and countries in the seminar activities.

June 2010: Celebrations of the 20th anniversary of EPDEF in Arras - France

Celebrations of the 20th anniversary of EPDEF in Arras – France which will include the show „Dances from the Past“ , international artistic festival and the visit of the Hadamar exhibition in Arras.

Exhibition „10 Years Anniversary of Caravan 2000“ – a photo exhibition of the main events of the past ten years in the partner countries. The exhibition will be opened in Gdansk, Poland and then will travel through the other member countries.

The seminar was also to mark the “European Year for combating Poverty and Social Exclusion”:

The seminar offered the participants the opportunity to identify and discuss common issues, learn from each other´s experience and hear about particular initiatives from colleagues who are involved in work which is improving this situation.

Giving the opportunity to get into the theme to a wider audience, some of the reports are available below:

Legal Basics and Institutions for INtegration of Disabled People

One World for All

Executive Board Meeting in Gdansk

In the days 7-10 Oct.2010 the meeting of the Executive Board of ‘Caravan 2000 IF” took place in Gdansk. The meeting was focused mainly on the strategy planning. The baord was hosted by the Municipality of Gdańsk and Polish Association for Persons with Mental Disability. The agenda of the meeting referred to current activities of the partners, long and short term planning of the future activities, communication between the members and partners and promotion of the federation.

Board members were hosted by the Vice Mayor of Gdańsk Ms. Ewa Kaminska at the diner. 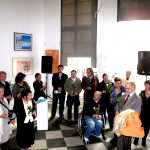 On the 8th of October 2010 the grand opening of the German – Polish Art Exhibitiontook place in Gdańsk. The exhibition was organized under the auspices of the European Movement for Diversity and Understanding “Caravan 2000” by the Polish Association for Persons with Mental Disability – Gdańsk Branch, Baunataler Diakonie Kassel and the City Hall of Gdańsk.

The City Hall building at Długi Targ 39/40 in the heart of the Old Town of Gdańsk was the venue for the exhibition. 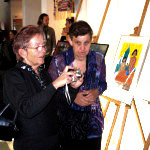 The exhibition was opened by the Vice Mayor of Gdańsk Ms Ewa Kamińskaand gathered a huge publicity.

The exibition presented achievements of the 12 artists from Germany and Poland. The artists are gathered in the artistic ateliers of Baunataler Diakonie Kassel in Hessen and PromArt Gallery of the Polish Association for Persons with Mental Disability – Gdańsk Branch.
Both organizations have cooperated in the Caravan 2000 network since 2000.

The artists presented at the exhibition:

The exhibition was the next one in the series of art events „One World for All”. The previous one took place in October 2008 in Jerusalem. 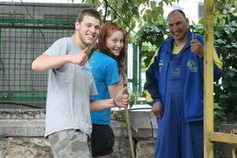 Volunteers from "Down Under" help beautify AKIM-Jerusalem's gardens

At the end of April this year, a group of post-high school teenagers came to volunteer at AKIM-Jerusalem. These youngsters come from all over Australia and New Zealand and are graduates of a wide variety of youth movements. As part of a 10-month program called "Shnat" run by the Jewish Agency (Sochnut) in Jerusalem they learn about Israel, gain leadership skills to take back to their youth movements and volunteer with various charitable associations around the country.

These energetic youngsters, who were not afraid of getting their hands dirty, opted to "clean up" the gardens of two of our hostels. Weeding, collecting dead leaves, cutting back low-hanging branches and clipping dead flowers were just some of the activities they performed together with AKIM-Jerusalem's own residents/gardening team. After clearing the ground in both the Magen and Beit Julia hostels everyone planted new flowers and herbs.

Our thanks go to all who came to help – and we look forward to other visits from groups looking to volunteer their time and efforts. For more information on volunteering at AKIM-Jerusalem, please write to: Miriam Marcus at info@akim-jerusalem.org.il. 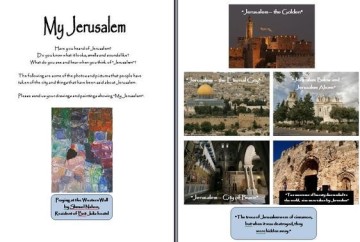 AKIM-Jerusalem invites all members of the Caravan 2000 Federation to submit pictures that reflect their thoughts, feelings, memories and other experiences that relate to Jerusalem:

Have you heard of Jerusalem? Do you know what it looks, smells and sounds like? What do you see and hear when you think of "Jerusalem"?

The following are some of the photos and pictures that people have taken of the city and things that have been said about Jerusalem. 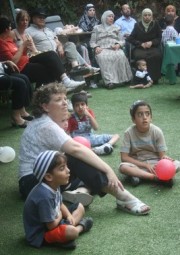 In October 2009, AKIM-Jerusalem's "Nofshon" Respite Care Center opened its gates to families who have children with special needs still living at home for a very special event. Invitations were sent in Hebrew, English, Arabic and German to families using the "Nofshon", "Tzaharon" extended school day program and to other families living in the community who are members of another association called "Shutaf". Fifty families attended the occasion – Israelis and Arabs, secular and orthodox. Truly, this event was an example of a place where all are treated equally, just like one large family living together with each other.

The staff at the "Nofshon" put on a show which was especially suitable for the young children as it was light and funny. Ms. Nadra Ghaleb provided a delightful reception and the event was photographed videoed. Following this the parents were invited to come up to the microphone with their comments, tell of their concerns and to give suggestions and requests (e.g., to increase from 15 the number of days permitted each child to stay at the "Nofshon", enlarging the elevator, weekend events and tiyulim for families).

Based on the feedback from this "Open Day" AKIM-Jerusalem is considering how to improve the services for these families in the future.